I had taken the ewes out for a romp on the Wedding Meadow.  They aren’t allowed there after May, so I thought I’d let them have a few nibbles of it while their own pastures grow a little taller and greener.

The lambs decided to have a goodly romp, and they raced from ewe to ewe until they were all openly gasping for breath.  At 60 degrees, it’s warmer than they’ve ever experienced before.  The ewes ate and ate, and eventually the lambs settled down, too.

It was time to go in, so I put out some grain for everyone to lure them in.  I did not consider that one of the hay mangers was empty of hay, while the other had plenty.  When the lambs and adults came in, the ewes went straight to the hay-less manger to have an easier time getting grain.  That allowed the lambs free access to the grain in the other manger.

Shortly after the end of the dining session, Chickadee began coughing and staggering.  Her breathing was harsh and rapid, and I noticed goop coming out her mouth.  Her mother was baahing at her while the other sheep backed away.  I grabbed her and started knocking her  sides, trying to loosen the goo.  Her coughing worsened and she fought me, hard.  A big wad of goop flew out of her mouth.

She stopped fighting, but began panting hard in great distress.  I called the vet.  The same vet I called for Agnes.  Thankfully, one of their field vets was just driving by, so she was examining Chickadee only 20 minutes after the call.   The vet confirmed that Chickadee’s lungs are raspy and probably at risk of infection.  She’ll get some antibiotics for a week to help her heal. 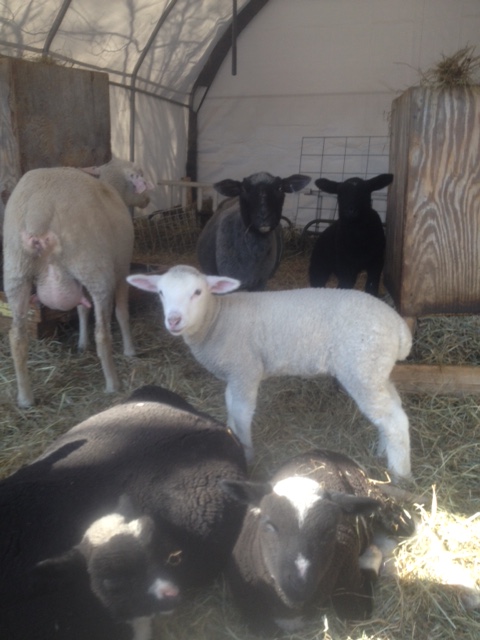